(A speech I made upon leaving the teaching staff of Morrinsville College, after 22 years’ teaching)

Someone begged me to come to Morrinsville College, and not a lot of people know that. You will be sad/glad to hear that I shall not pass on to you at this time gems of wisdom that I have gleaned along the way. For the moment I wish to make one or two comments, say a word of thanks here and there, and finish with a short poem, which can acutally be sung (can you believe?).

My last year as a super-nummery has gone quickly, and though I am ready to lay down my chalk and duster I shall miss my classroom, A21, and the work that has occupied me for the past few years. It’s been an interesting journey from the various jobs I had in England to be here at Morrinsville College, and I shall be writing about some of them before too long.

I have enjoyed my association with Gordon – a cooperative and helpful head of department, and I shall miss our challenges on the pool table. Gordon handles a mean cue, as do Alvin and Noel. Steve is different; he is the only guy I know who can play pool and hold several conversations with other people in the staffroom at the same time. Though he has been making an effort to improve, he’s now started answering the phone as well.

The English Department has been a source of nourishment and encouragement, and I have appreciated all the help I have been given. My thanks go to Margaret, Jan, Margaret, Kay, Robert and John who helped me to feel that I belonged.

Whilst seated in ‘The Stirrer’s Corner’ I have gleaned new words and extended my vocabulary no end, along with stories to make one’s hair curl. I have also picked up a wealth of chit chat as I have moved around the staffroom.

A special word to Principal Dick Gwatkin, who amongst other things performed the impossible by getting A-block soundproofed, and who provided understanding, sympathetic and practical support at times when I needed it most. 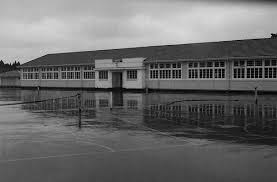 There has been one disappointment and I must mention this. I felt that I was making real progress in the principal stakes, and some of you will recall that I started wearing a tie at one stage. Well, it seemed to work for Graham. But that all ceased when I was promoted to the position of super-nummery. At first I was really chuffed as I always knew that I was ‘super’ but to be a ‘nummery’ as well, well, that was something else. But it did seem to ruin my chances of promotion, and I never was invited into Dick’s office for a special cup of tea with a saucer. Still, it was a great relief to Dick, as he knew that I had been after his job, and so he was able to go to bed without his teddy again.

Which brings me to my closing verses with guitar accompaniment by Miss Anne Duffy (at no extra cost):

They Say That’s the Name of the Game

Today brings an end to my time here / it comes to us all in the end / and I’m happy to say as I leave now / I can count you as some of my friends / yes I can, yes I can …

I’ve come to the end of my lessons / my writing thing’s run out of ink / both me lungs are bunged up with chalk dust / there’s a snow storm whenever I sneeze / when I sneeze, when I sneeze …

I might not have been that good-looking / or smiled in the right kind of way / but I did keep my pigeon hole tidy / at the end of each working day / yes I did, yes I did …

They say that’s the name of the game.

← Our living room
A necessary journey →